There are a lot of things that could be keeping you up at night. While some can have a bigger impact on the quality of sleep you’re really getting (like watching TV before bed or spending too much time looking at your smartphone), others might just be caused by the person sleeping next to you.

While we may love, or at least enjoy, the company of our significant others, sometimes bedroom habits aren’t always aligned. From how hot or cold the room should be at night to how much space on the bed one person needs – things can get messy.

We surveyed 1,000 Americans who frequently share a bed about what truly gets underneath their skin when between the sheets. From hogging the blankets to eating food in bed, what’s bothersome enough to make someone desire a night to sleep alone? Keep reading to find out. 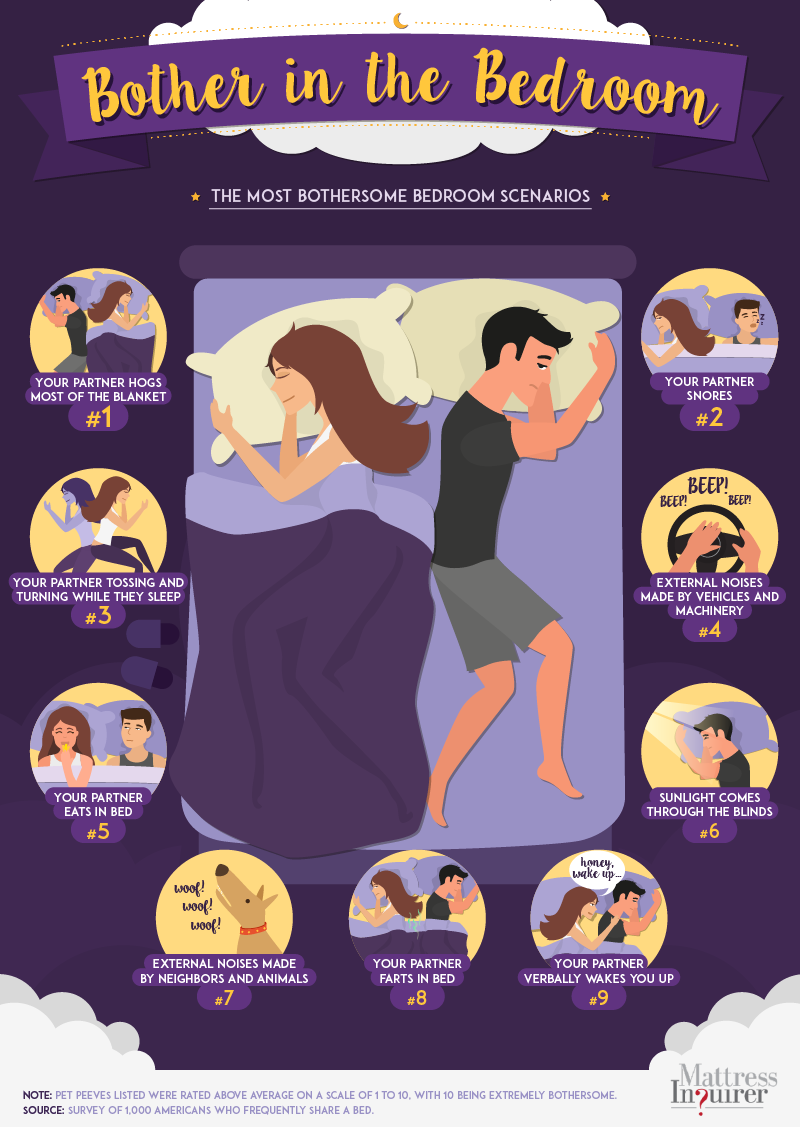 Respondents graded bedroom scenarios based on a scale of 1 to 10 (with 10 being extremely bothersome), and participants, on average, rated a partner hogging the blanket as their No. 1 bedroom pet peeve. At No. 2, though, was having a partner who snored while sleeping. Around 37 million Americans identify (or have been identified by the people who sleep next to them) as chronic snorers, which may also equate to millions of unhappy bedside partners.

Other scenarios like tossing and turning, outside noises, and even sunlight coming through the blinds were also highly rated sleep disruptors by those polled. Light can be a primary reason why people wake up feeling tired, as it can affect one’s ability to fall asleep and stay asleep comfortably. 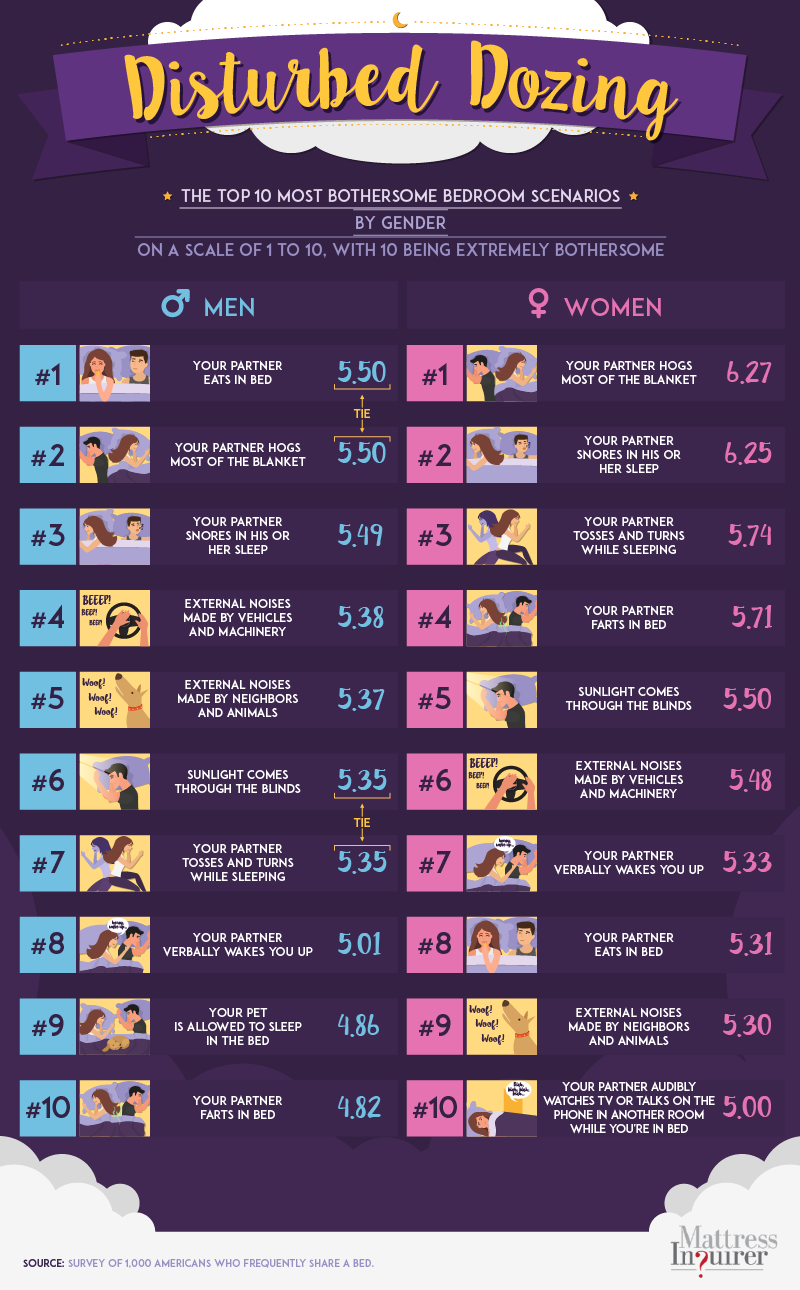 Here are a couple of things you might want to consider if you share a bed. Our study determined women found a partner who stole the covers at night more bothersome than men.

The biology of women can naturally lead to colder extremities, which may explain why they rated blanket thieves about a 6.3 on our bothersome scale versus men who scored this act a 5.5.

Women were also more inclined to identify a snoring partner as more bothersome than men. Research shows men are more likely to suffer from snoring than women, meaning their female partners are more likely to have to deal with their nighttime sound effects.

Of all the bedroom pet peeves we asked respondents to rate for us, men were the most frustrated by partners who ate in bed (5.5) or hogged the covers (5.5), even more so than snoring (5.49).

Shifting in the Sheets

For partners who share a bed but may not necessarily share a home, we found men and women had slightly different perspectives on what was or wasn’t a pillowtop problem.

Regardless of whether it happened in their home, men and women told us a partner who snored through the night was one of the most aggravating bedtime behaviors. Whether it’s keeping you from falling asleep or waking you up in the middle of the night, there’s nothing more off-putting than this unwelcome ambient noise.

While women rated a partner who farted in bed as very bothersome, men didn’t find it all that bad. Men also weren’t as bothered by a partner who used their phone in bed to text or check social media (women, on the other hand, did rate it as one of the more aggravating things their partners did), or a partner who left the bed unmade in the morning.

Interestingly, women were less inclined to label a partner who let their pet sleep in the bed as agitating; however, men did not agree with this assessment and rated it among their top six annoyances. 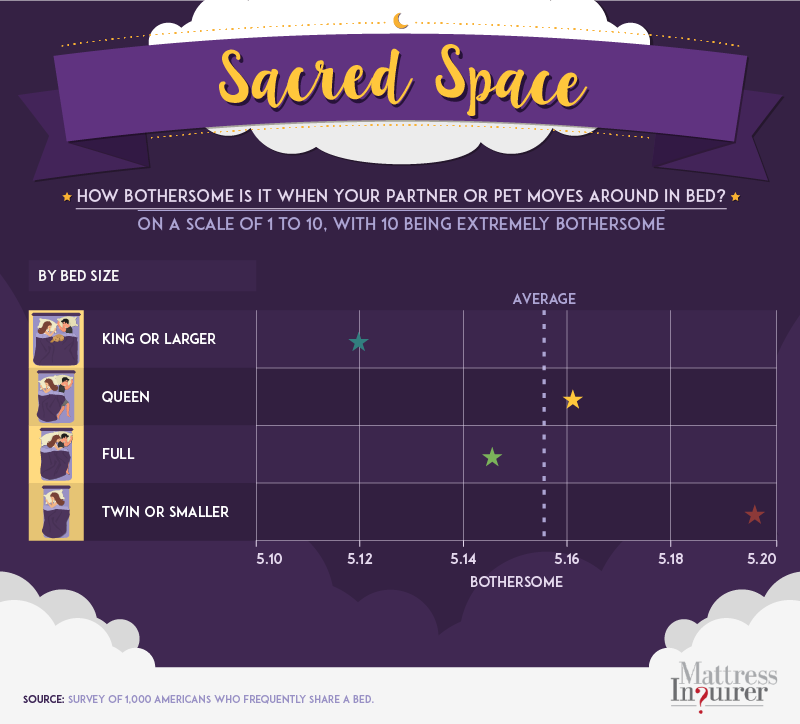 While keeping each other warm at night can be nice, many couples enjoy their space when it comes time to catch those zzz’s. We all have our own side of the bed, and the more space our mattress has, the bigger that side becomes.

Our survey found respondents with the largest beds were less likely to be irked by bothersome bedtime behaviors, like a partner or pet that tosses and turns throughout the night. Men and women who slept in king-sized beds (or bigger) or full-sized beds rated their aggravation with restless partners and stirring pets below the overall average for bothersomeness.

Participants with queen-sized beds and twin-sized beds (or smaller) rated their level of frustration with these nighttime extracurricular activities above the overall average. 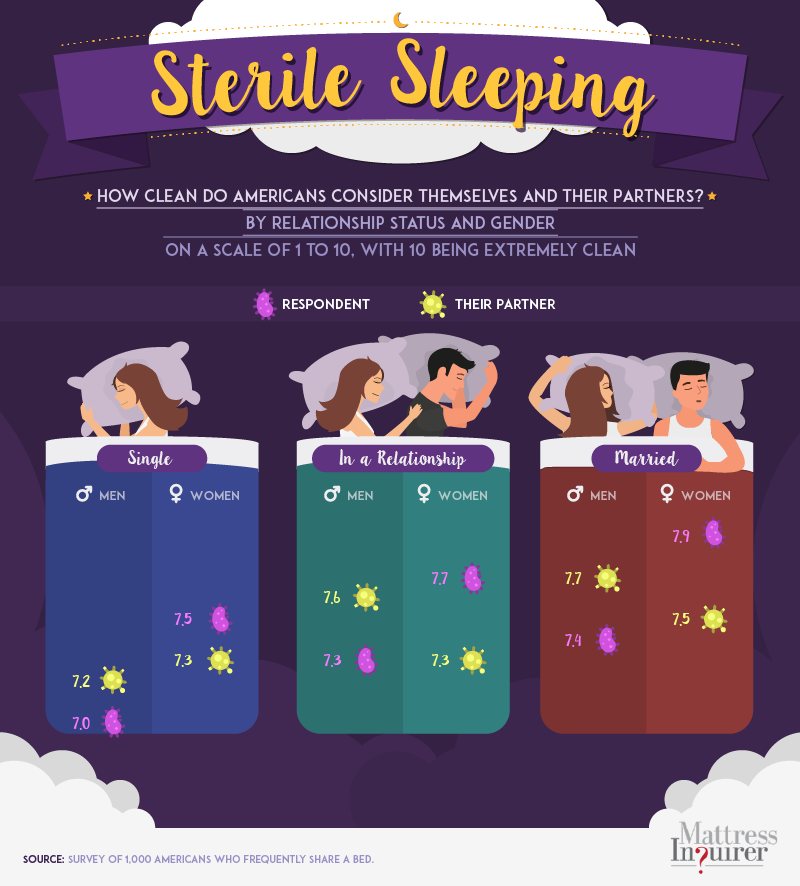 Just how clean do you think you are? The odds are your partner may not entirely agree with what you think.

Our survey found women considered themselves the cleanest in their relationships – while men admitted to be grubbier than their partners. Single women weren’t quite as likely to be completely hygienic as those in a relationship or married, and single men were even messier.

While women in relationships saw themselves as cleaner than single women, men also gave themselves a boost in their sanitary self-assessments (and to those of their partners as well).

Women who told us they were married rated themselves as significantly cleaner than either single women or those in a relationship, while men admitted they were only slightly more sanitary even after they got hitched.

Just because you love someone doesn’t mean you can’t sleep without him or her. It may sound slightly counterproductive, but studies have found occasionally sleeping apart can make relationships happier over time.

Our survey found married women were the most likely to enjoy a night to themselves from time to time, with over 17 percent reporting often wanting a night’s sleep separate from their partner. Married men, on the other hand, were significantly less likely to enjoy that time alone – with less than 8 percent sharing the sentiment. In fact, more than 1 in 4 married men never wanted to sleep apart from their spouse, and only slightly fewer married women felt the same way.

Getting a Good Night’s Rest

The average person spends a third of his or her life sleeping, and the quality of sleep you get at night can have an enormous impact on virtually every area of your life and health. From your mood to your immune system and even your physical appearance, calling it “beauty sleep” isn’t far from the truth. While there isn’t much you can do to change your partner’s sleeping habits, there is one thing you can control – your mattress.

The kind of mattress you’re sleeping on at night matters. At Mattress-Inquirer, we take that challenge seriously. Our mattresses are expertly designed to keep you cool and comfortable, and we’ve got over 1,000 five-star reviews to prove it. From the smart technology we use to create our mattresses to the most eco-friendly foam creation process on the planet, we know you’ll love the sleep you get with us. Visit us online at Mattress Inquirer.com to learn more.

For this project, we surveyed 1,000 Americans who frequently share a bed with another person.

Interested in sharing this information about the most bothersome bedroom behaviors with your audience for noncommercial purposes? Feel free. When doing so, we ask that you provide your readers with a link back to this page, so they can learn more about sleep habits and view any additional data.