There are many ways that people go into debt, but there’s a commonly overlooked one. It can happen when you decide to burn the midnight oil on a project for work, or when you don’t cancel auto-play and decide to keep binging that show. You’re borrowing against the health benefits of a good night’s sleep and you’re building up sleep debt.

We surveyed over 1,000 people to understand when they were most likely to lose out on crucial sleep and whether it was possible to shake off this debt. Read on, but only if it isn’t past your bedtime.

Can You Catch Up? 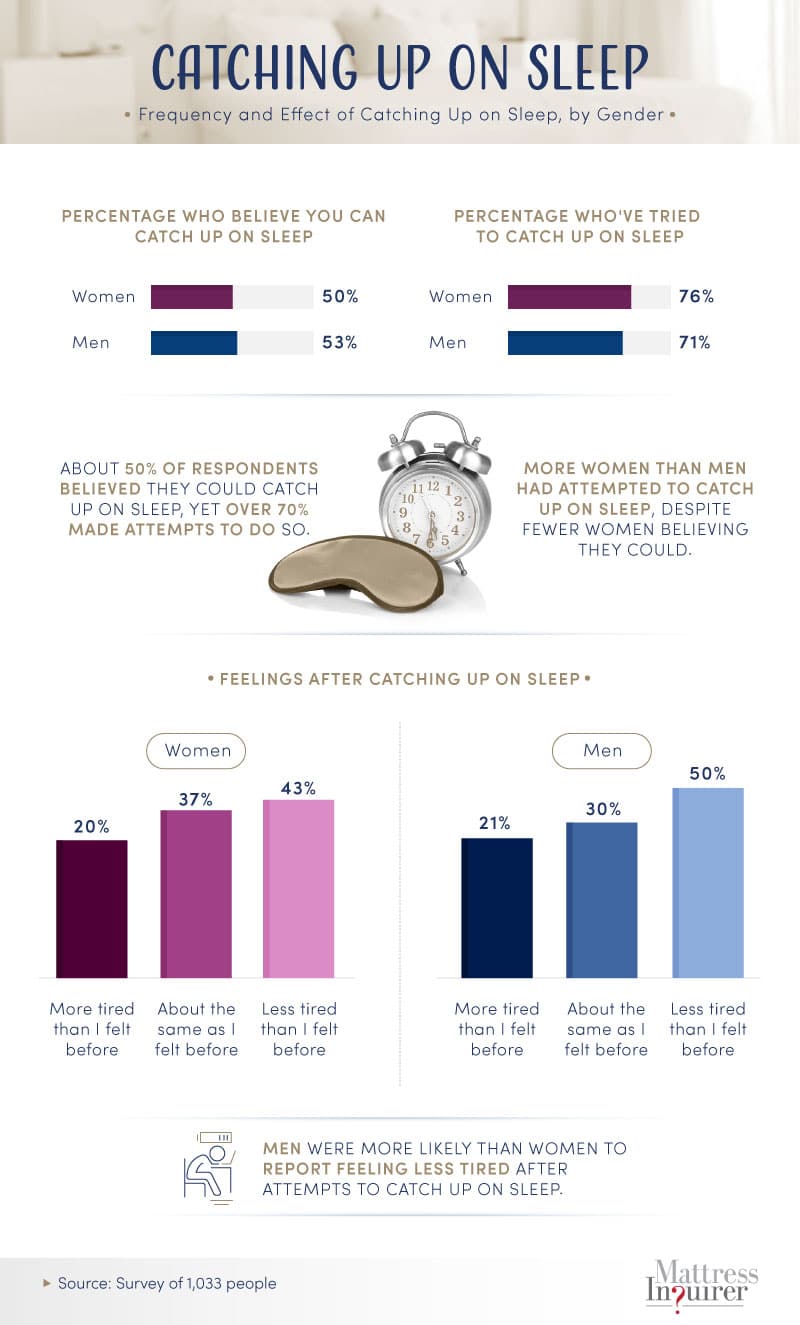 Amid a “catastrophic sleep-loss epidemic,” sleep scientist Matthew Walker has been outspoken about the health benefits of a proper eight hours of downtime for the human body. And while over 50 percent of both men and women believed they could catch up on sleep, falling behind can have dire consequences. Sleep deprivation has been linked to some of the most serious ailments, such as Alzheimer’s disease, cancer, diabetes, obesity, and poor mental health. All because you’re trying to run your body on less than a full tank of zzz’s.

Over 70 percent of men and women attempted to catch up on sleep, and it was men who were more likely to feel less tired after sneaking in that nap or trying to sleep a bit later. Yet for an average of about 20 percent of people, attempting to get out of sleep debt actually left them feeling more tired than they did initially. 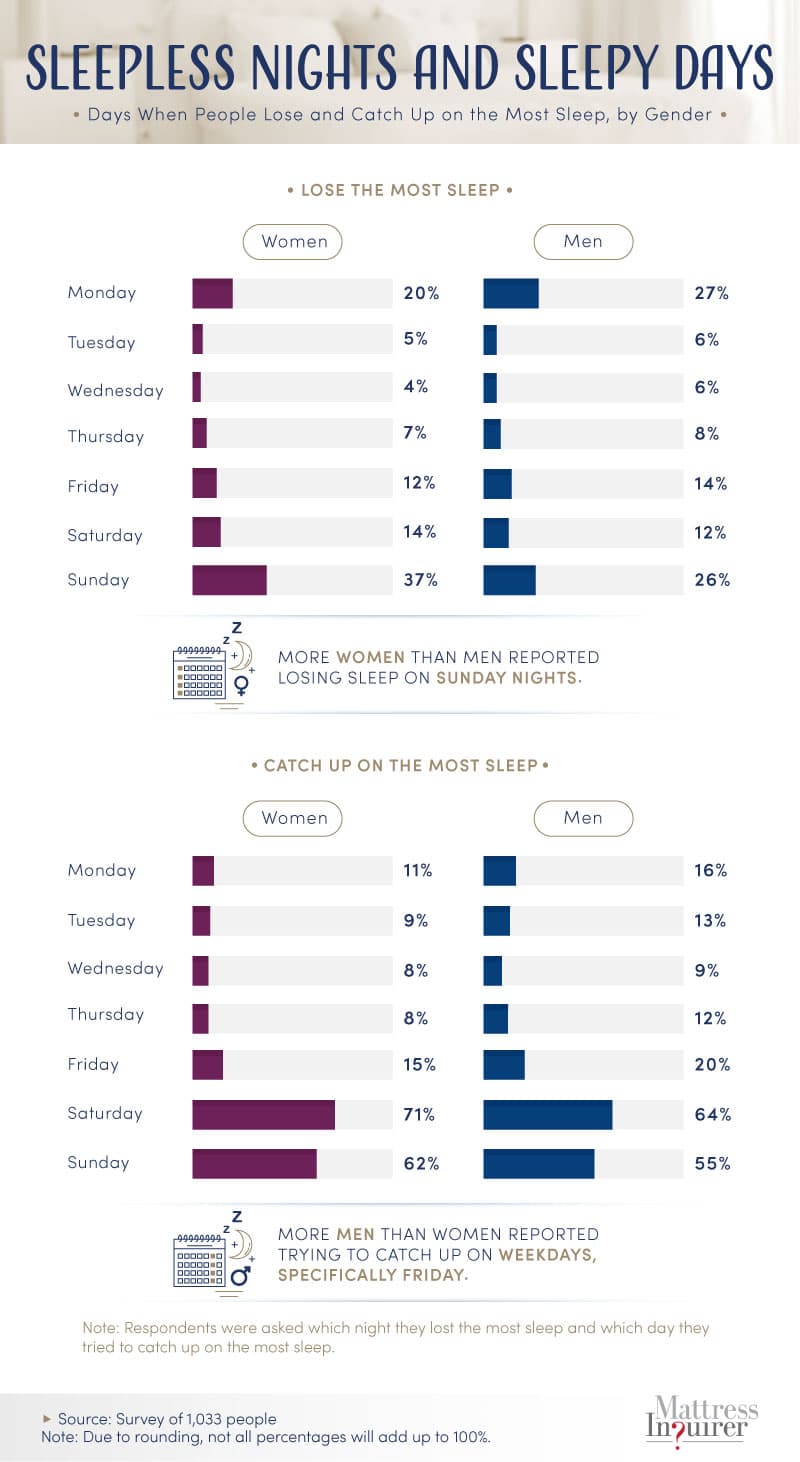 While Sunday may be referred to as a day of rest, it’s anything but for the 37 percent of women surveyed who found it to be the night they lost the most sleep. Twenty-six percent of men experienced losing sleep on Sundays as well, but it was their second highest day for sleep loss behind Monday at 27 percent. So why is it that right before the traditional work week kicks off, men – and even more so for women – lose out on the value of a good night’s rest?

One possible explanation is that the rhythm of people’s traditional sleep cycle is thrown off by weekend activities. After you’ve messed with your regular schedule, your body may try to readjust when it thinks it should go into low-power mode. 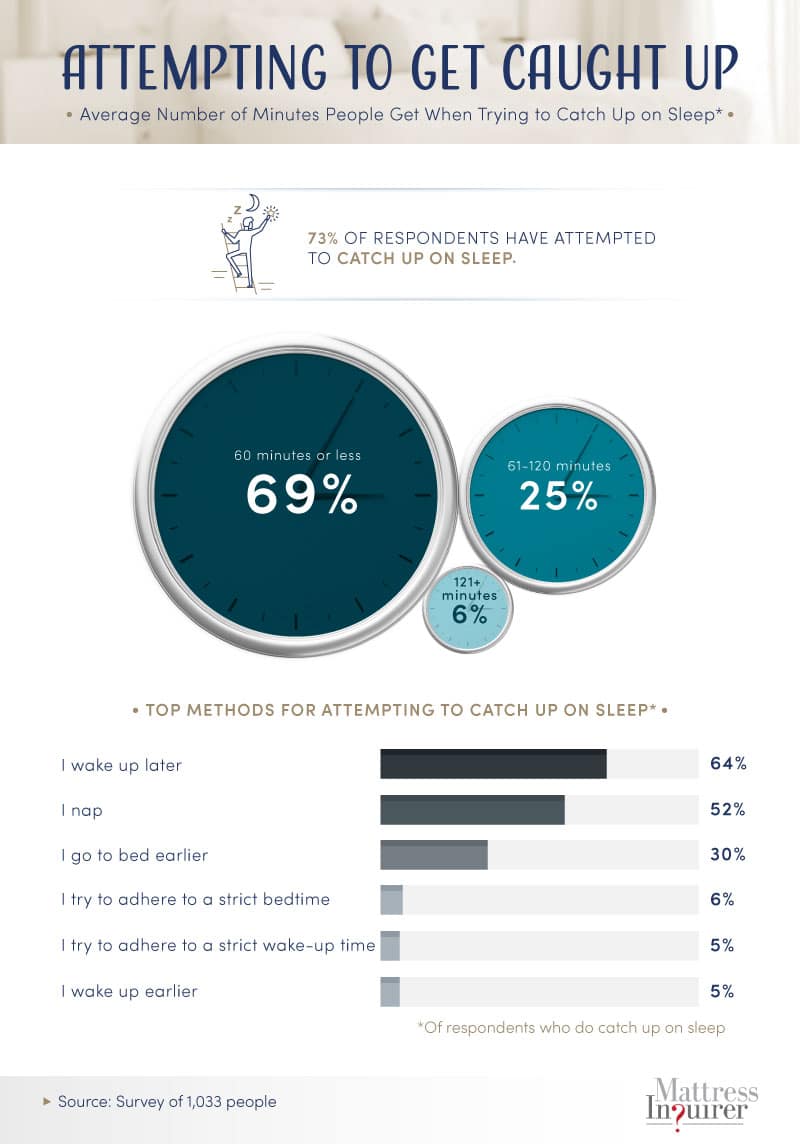 When 73 percent of men and women try to endeavor to catch up on sleep, they’re not actually logging a significant number of minutes. In fact, almost 70 percent of those who attempted to pay down their sleep debt with some more shut-eye only got an extra hour at most. Less than 6 percent logged an additional slumber beyond two hours.

Over 50 percent of those who tried to erase their sleep deficit tried to do so through a nap, but that may be a foolish endeavor. According to Matthew Walker, “[Naps] can take the edge off basic sleepiness. But you need 90 minutes to get to deep sleep, and one cycle isn’t enough to do all the work.”

The Importance of Amount 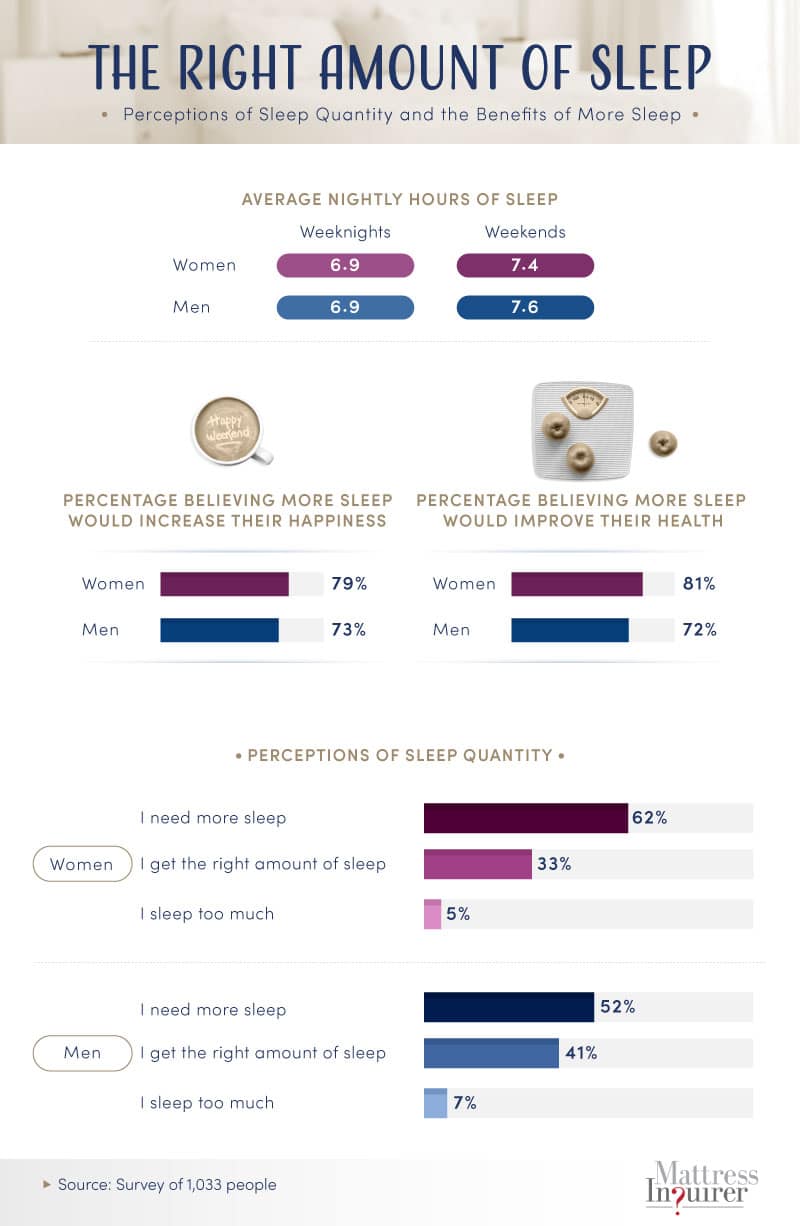 Only on three days of the week, Friday through Sunday, did both men and women report, on average, receiving more than seven hours of sleep. Sleep debt isn’t just a problem today – the compounding effects on your body can mean a less healthy life.

Over 50 percent of men and 62 percent of women reported needing more sleep. If only their bodies were more explicit in sending SOS (send more sleep) alerts beyond the yawns, nodding off, or blurry vision.

The Benefits of Bedtimes 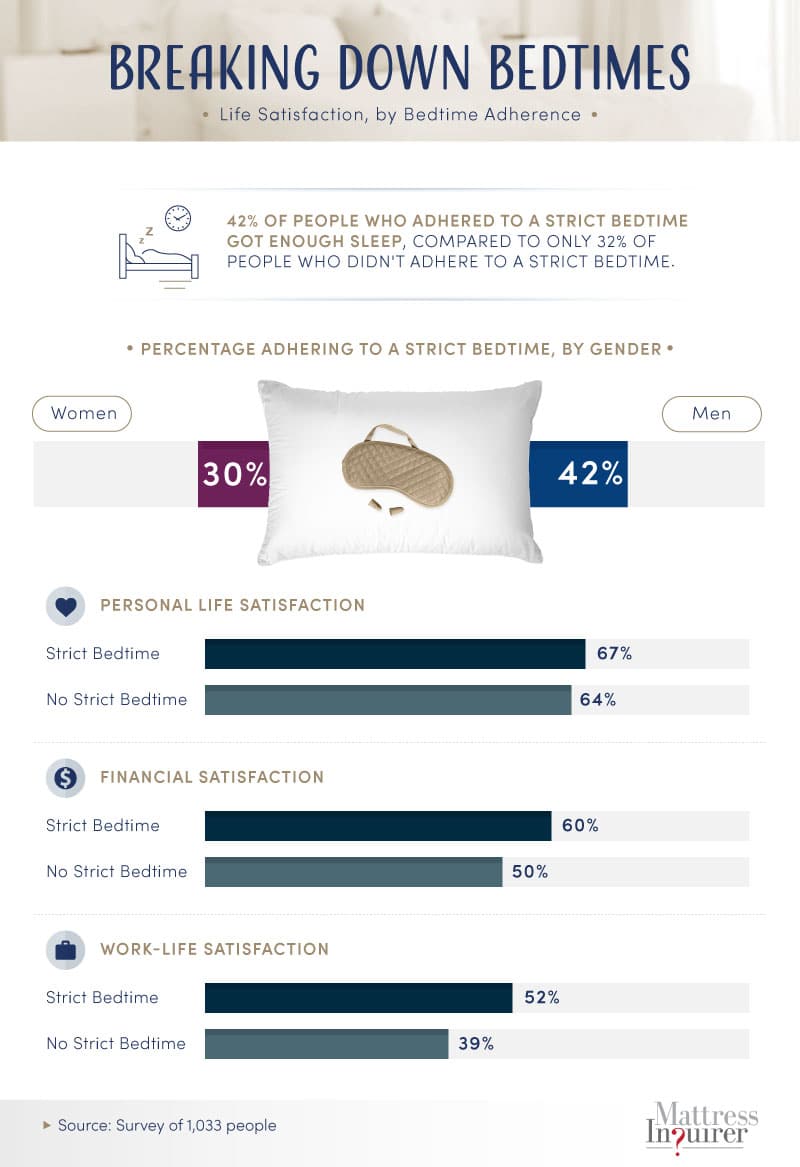 “It’s past your bedtime” isn’t a comment you’d expect to hear as an adult, but it’s great advice for living a better life.

The Benefits of Waking Up 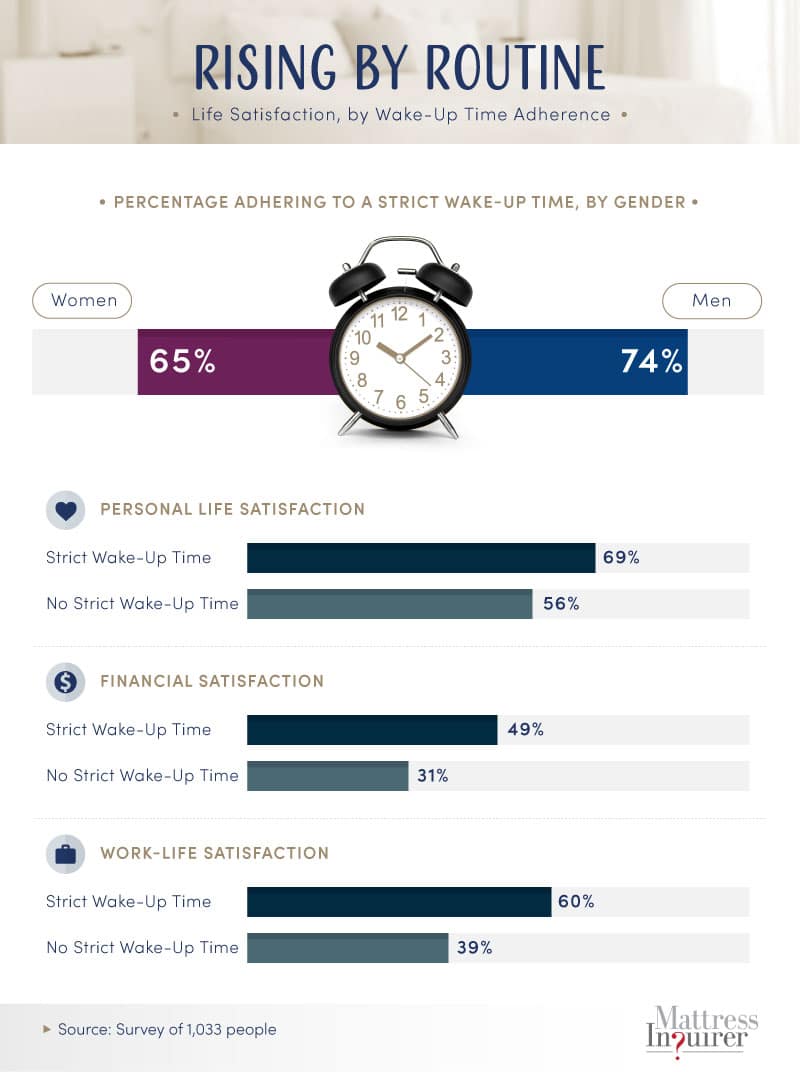 While most people didn’t have a strict bedtime, waking up was a different story altogether. Regardless of how sleep deprived there were, 65 percent of women and 74 percent of men held themselves to a strict wake-up time. Whether to help our family get ready for the day or to begin the long commute to work, most of us answer when the alarm calls.

Much like those who enjoyed positive results by having a regimented bedtime schedule, the same could be said about wake-up times. Those who adhered to a strict rooster crow reported higher satisfaction in their personal lives, work lives, and finances.

Putting It to Bed

If you want to wake up feeling happier and healthier, there’s a very easy route to doing so: Getting more sleep. It can be hard to get the right amount to start, but attempting to catch up on sleep isn’t as effective as getting the right amount of zzz’s in the first place. Don’t make counting sheep any harder than it has to be – make sure you find the best mattress for your needs with

Using Amazon’s Mechanical Turk, we surveyed 1,033 people with a variety of questions related to sleep: Their sleep habits, the factors that affect their sleep habits, their thoughts and behavior regarding sleep debt and catching up on sleep, and other questions related to their experiences and perspectives regarding sleep. This data relies on self-reporting.

If you find this information valuable, don’t sleep on it! Please feel free to share or reference this study for any noncommercial use. All we ask is that you link back to this page so that your audience can view our entire analysis.

1 thought on “Buried in Sleep Debt”