Getting enough quality sleep is a reasonable (and common) health goal. According to the Centers for Disease Control and Prevention (CDC), teens need around eight to 10 hours every day, while adults up to age 60 should shoot for at least seven hours every day. So while there are plenty of reasons to get enough sleep, sleeping too much can actually be a problem. In fact, it’s been found that it may contribute to feeling more tired the day after the snooze-fest, which is probably the opposite effect the sleeper intended.

We polled 1,038 people about their sleep habits to find out exactly who is oversleeping, which factors may contribute to this habit, and what effects oversleeping may have on day-to-day living. 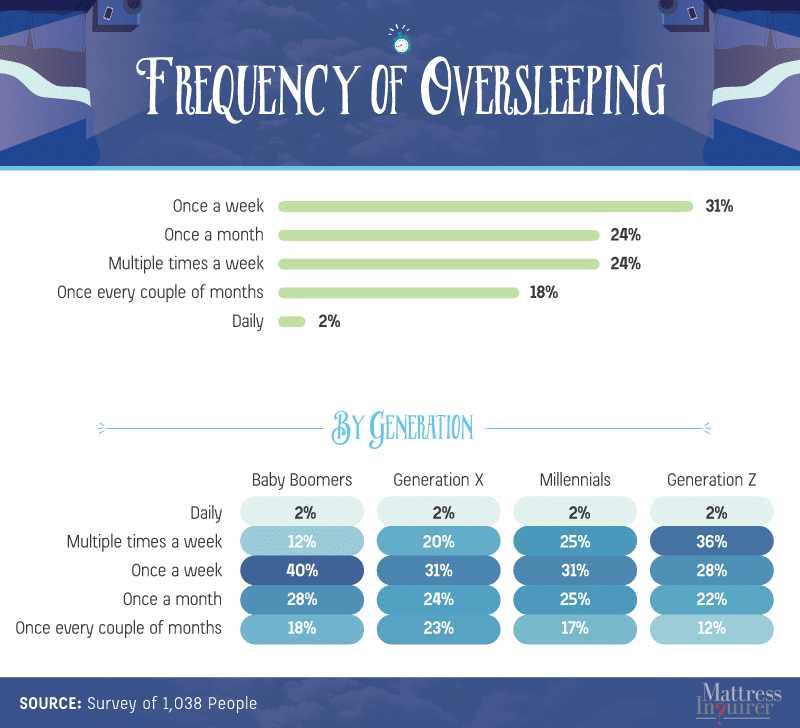 First, we asked our survey respondents how often they overslept. The most frequent answer was “once a week,” garnering 31 percent of the responses. Once a month was next in line (24 percent), a rate matched by those who snoozed a little extra several times a week. Once every couple of months was the fourth most common answer (18 percent), and chronic oversleepers (those who selected “daily”) made up 2 percent of our respondents.

It’s interesting that sleeping in once a week nabs the top spot in this category, but it’s not altogether surprising. After all, it’s not unusual for people to try to play “catch up” when the weekend hits, making up for long days at work coupled with a five-day stretch of early rising. Who doesn’t look forward to a lazy Saturday morning in bed with no alarm to rouse you?

Remember, Gen Zers are currently the youngest defined generation – typically described as the birth years of 1998 to 2017. This cohort includes very young kids who are still probably taking naps, as well as teenagers who biologically need more sleep than adults. The American Academy of Sleep Medicine notes kids aged 13 to 18 should get at least eight hours of sleep per night (upward to as many as 10). Gen Zers who sleep in more often may be doing so due to biological need – and not necessarily due to laziness.

Time to Wake Up 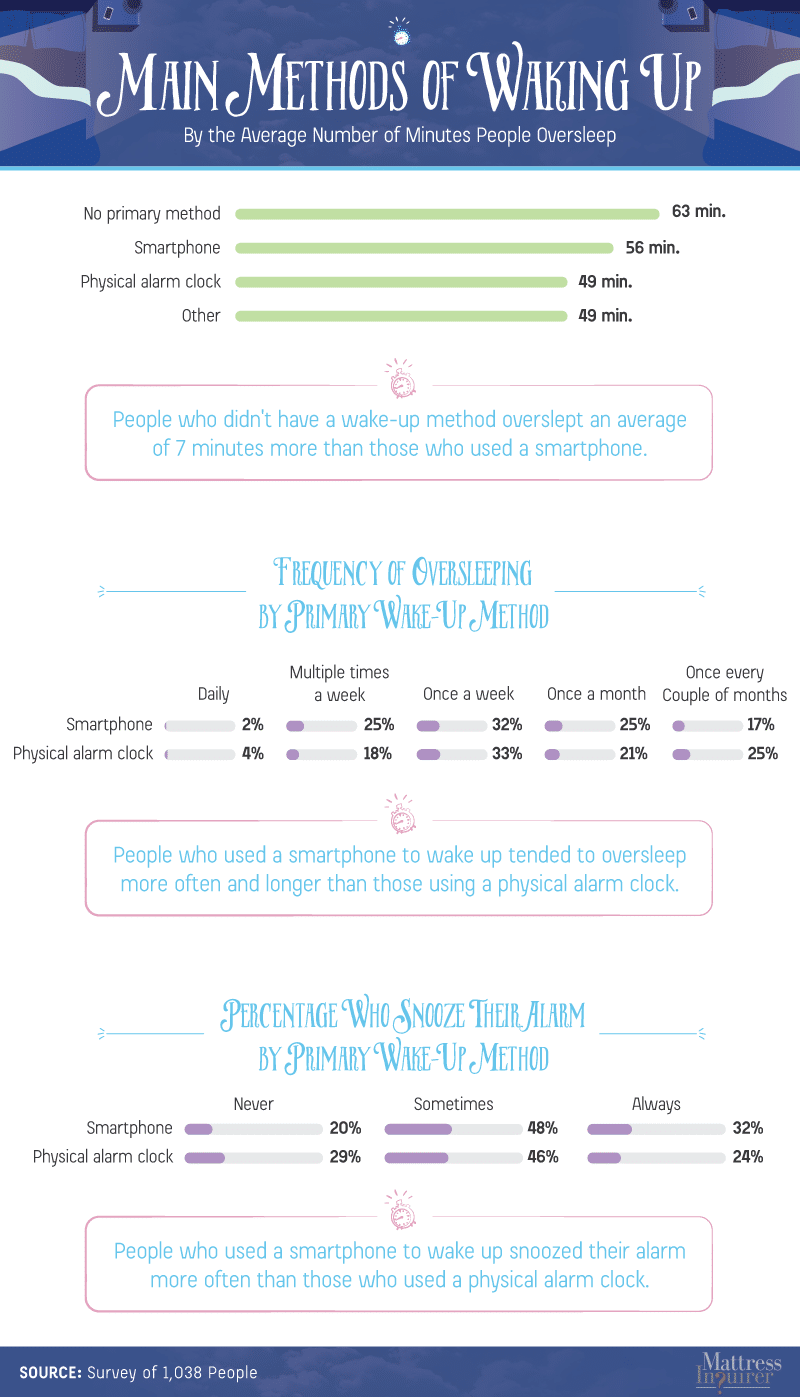 Not everyone has a rooster in the backyard to crow at the crack of dawn, so alarm clocks have been a thing for over a thousand years, as well as other reliable methods to wake people up. Whether it’s a wind-up clock that clangs a bell when the desired time creeps around the clock face, the sun that blazes in through your bedroom window, or your smartphone with its carefully crafted alarm system, there are many ways people force themselves up and out of bed at a certain time.

A big chunk of people polled, however, reported they had no consistent method of waking up. We found these people woke up an average of seven minutes later than those who used a smartphone. Smartphone alarm users, though, love to push the snooze button, which usually allows them to snuggle down into bed for just a few more minutes before it chimes yet again. The folks with the best wake-up habits? Those who used physical alarm clocks like the ones that reside on a nightstand. These people were far less likely to hit the snooze button and were likewise less likely to oversleep than their smartphone-using friends.

The Fallout of Oversleeping 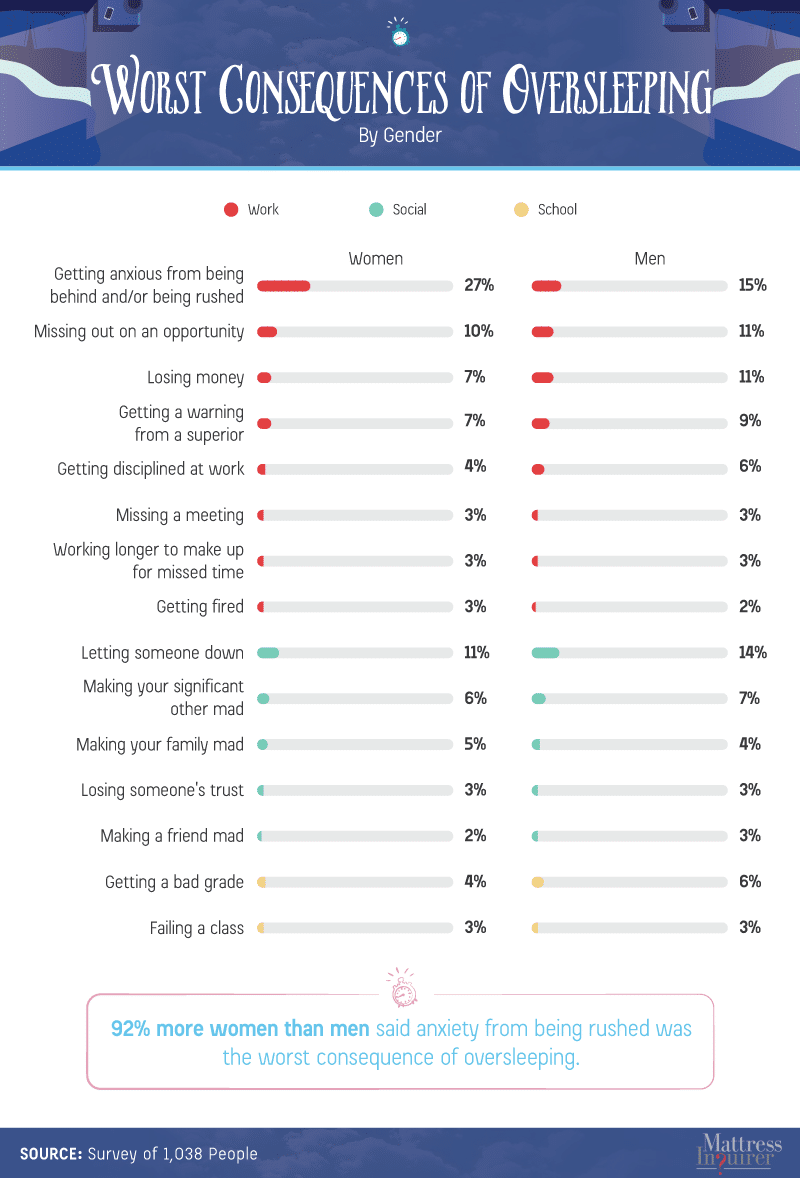 Oversleeping can not only negatively affect your fatigue level the next day but also there are other direct consequences to sleeping later than intended. Consider what can happen if you were to be tardy (or ill-prepared) for work because you slept too late, and it’s easy to imagine what other areas in your life could be impacted by sleeping in.

We asked both men and women to consider the worst consequence they’ve suffered due to hitting the snooze button a few too many times. We found women were more likely to report a work-related consequence. On the other hand, social problems due to oversleeping were also reported, with men noting these results more often than women. 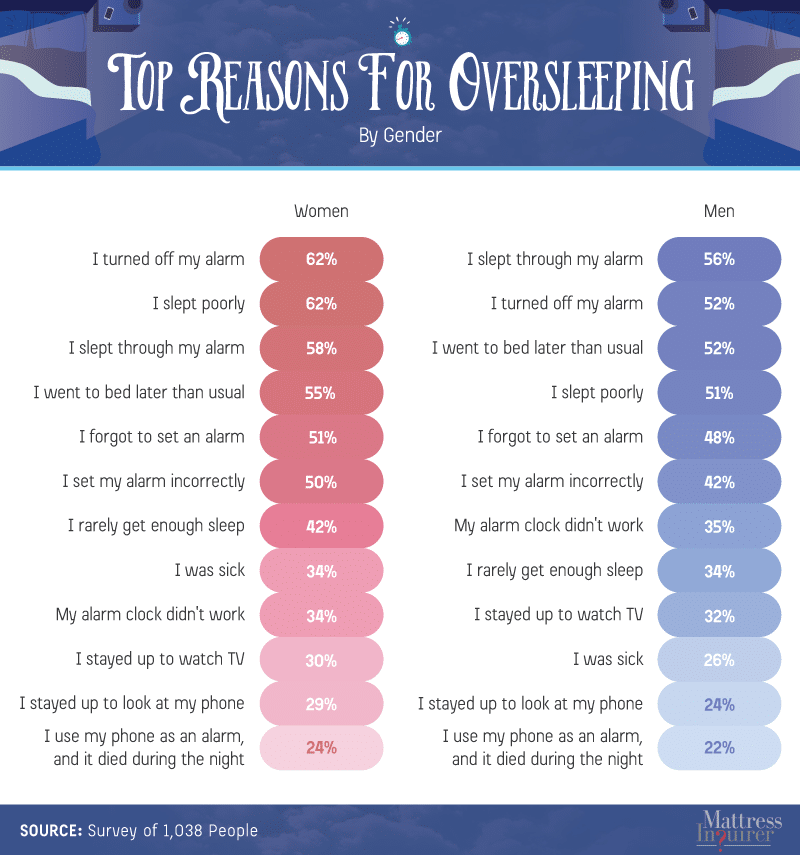 There are a ton of different factors that contribute to oversleeping. Some people just shut their alarm off, roll over, and slip right back into dreamland. Others have technical issues (setting the alarm incorrectly, or the clock itself had issues and failed to raise the alarm at the appropriate time). Most people cited simply sleeping through their alarm, which can indicate a circadian rhythm disorder but can also be a result of simply not getting enough sleep or switching up bedtimes (remember, many respondents noted they overslept around once a week, which may coincide with a weekend sleep-in fest).

We divided the answers to this question gender-wise, so we could get a feel if there were any disparities between men and women and the reasons they overslept. Women reported “I turned off my alarm” 10 percentage points more than men (62 percent to 52 percent). Women also cited “I slept poorly” 11 percentage points more than men as another reason why they’ve overslept.

Fear of Missing Out

If you oversleep, you run the risk of being late or missing an event. The most common of these cited by our respondents (75 percent) was work. Yikes! As we go down the list, we can almost imagine our daily itinerary before we take that first step out of bed. The next most common event people missed was an appointment (52 percent), followed by a class (50 percent). Plans with a friend (47 percent) and family functions (31 percent) were also noted as missed opportunities due to a little extra slumber.

Dividing these results by gender, similar responses existed across the board, except for appointments, which women more commonly missed.

And there are even further differences when we break it down by generation. Gen Zers, for example, haven’t had a lot of time to build up a ton of work experience, so their 44 percent report of missing work is understandable, while Gen Xers were the highest perhaps due to their large presence in the current workforce. On the other hand, Gen Zers were far more likely to miss class (53 percent) due to oversleeping than baby boomers (13 percent), simply because Gen Zers are still in school and baby boomers largely are not.

You Set How Many Alarms? 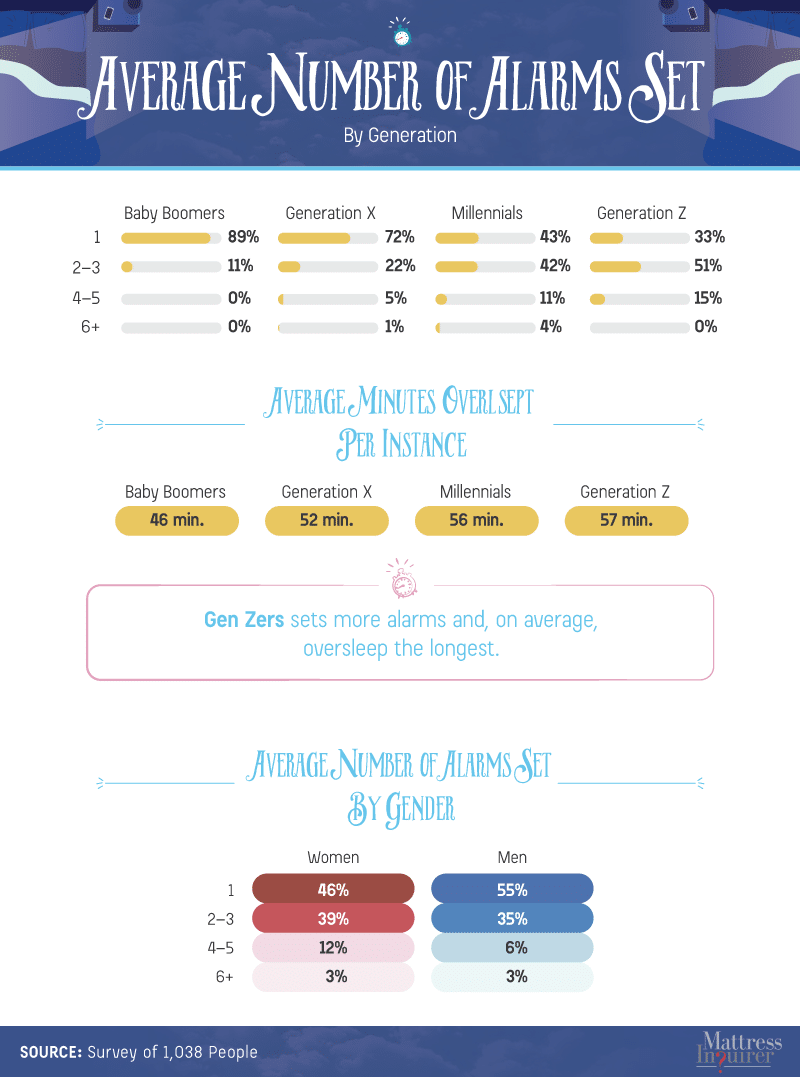 You’ve seen the screenshots of a smartphone’s alarm app where someone has five alarms set at 10-minute intervals, right? Well, it turns out that not everyone has his or her phone set up that way. Shocking, right? It seems that baby boomers were more likely to only have one alarm set, and Gen Zers were the most likely to have four or five. This is probably due to “kids these days” entering the world with a smartphone practically in hand, so their daily habits have evolved differently than the generations that came before them.

It’s not all good news for these youngsters, though. Despite their four- to five-alarm habit, Gen Zers still constantly overslept more often than baby boomers. Also, women tended to set multiple alarms more often than men did.

Sleep is a beautiful thing, but daily life either forces us into somewhat strict sleeping schedules or gets in the way of our rest and relaxation time. While there are gender (and generational) differences in how we approach setting alarms and the impact oversleeping has on our lives, it’s easy to see a solid night’s sleep (without hitting the snooze button a million times) may be our best bet for health and happiness.

And on that journey to get a good night’s rest, you’ll need to find a great bed. That’s where Mattress-Inquirer comes in. We cut through the noise and get to the core of finding the best mattress you’ll love – not one a mattress salesperson would love to sell you on. Visit us to get started.

We collected responses from 1,038 Americans through Amazon’s Mechanical Turk. 50.4% of participants were male, and 49.6% were female. Participants ranged in age from 15 to 77, with a mean of 33 and a standard deviation of 11 years. Participants were excluded if they were clearly not paying attention (e.g., failed attention check questions or entered obviously inconsistent data). Hypotheses were then statistically tested.

The data we are presenting rely on self-reporting. There are many issues with self-reported data. These issues include but are not limited to: selective memory, telescoping, attribution, and exaggeration. As such, this content is purely exploratory.

Find this information interesting? Skip the snooze button and feel free to share it with your readers for any noncommercial use. Just make sure that you link back to this page so that they can have access to our entire analysis.